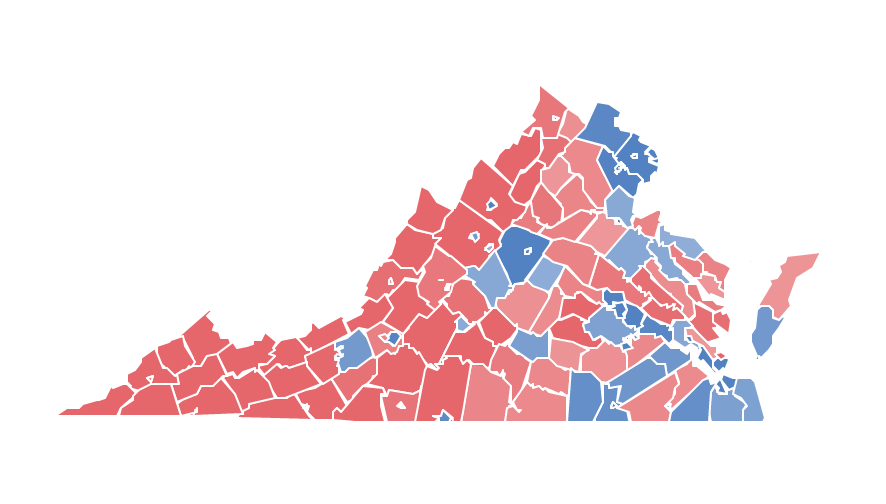 To win everywhere in Virginia, Democrats need a platform that will appeal everywhere.  We must articulate a role for government that considers how effective it is for the whole state.  We can’t just be a government that works only for the urban and suburban areas.  If we want to win the majority of seats in our legislatures (both state and national), we also have to be competitive beyond the areas that currently vote Democratic. We have to convince Virginia voters that the policies we are proposing and the issues we stand for will work for all, no matter where you live.

Even though Democrats have won every statewide election since 2009 it only takes a quick look at this map of 2018 election results for the Virginia Senate race between Tim Kaine and Corey Stewart (a race which Kaine won by 16 points), to see that a divide exists and Democrats need a strategy to appeal to rural areas in our Commonwealth.  The 9th Congressional District, which makes up the SWVA corner, was a Democratic stronghold for decades. A Democrat, Rick Boucher, held this Congressional seat for 14 terms, and only lost his seat in 2010- yet Kaine lost this district by 29 points.  How do Democrats regain trust in a district like this and begin to win again?  How do we create  “a Virginia that works for all” for which Senator Kaine advocated during his campaign?

We must ask ourselves not only why we are in this current predicament, but also how we got here and how do we get back on track in rural Virginia. We should start by advocating for an effective and functioning government.  In the preamble of the US Constitution, the purpose of our government is defined:  “…in order to form a more perfect union, establish justice, insure domestic tranquility, provide for the common defense, promote the general welfare, and secure the blessings of liberty to ourselves and our posterity…”.  Even as our founders agreed on this structure and goal of government there was a debate about the role of government to achieve those goals, and that debate has continued through the more than two hundred years of our nation’s history and evolution.

I realize how weighted a term “government” currently is in our political discourse, but we can’t forget that we have relied on a functioning government and government programs to solve some of our country’s most pressing issues: the Great Depression, the Dust Bowl, Civil Rights, ending slavery and bringing about an end to the Civil War are a few examples.  Government programs like the GI Bill were instrumental in building a 20th Century middle class, the FDA regulated a food industry that had become unsanitary and unsafe during the industrial revolution, and public schools created opportunities for all Americans to be productive and contributing members of society. Government placed structures in our economy that curbed unfair practices that favored big business over people.  Government created our National Parks and National Forests and the EPA to protect our clean air and water and preserve our environment for future generations. There are many more examples but, in short, we need good government and we shouldn’t be shy about embracing the positive role it can play.

I had an uncle who described good government as a train that took two kinds of people to keep the train functioning and getting people where they need to go; one person to throw fuel in the fire to keep the train moving forward and one person to put on the brakes to keep the train from running out of control.  He said, “I’m a Democrat because I am the kind of person that would rather be the one throwing fuel into the fire than the one putting on the brakes.”  I feel the same way.  I fundamentally believe that government has a role in looking forward to solve problems, ushering in progress and creating the structure that allows our country to thrive and be healthy, safe and productive.  I also believe in a partnership with and a healthy respect for the people  putting on the brakes because we need them too.

Unfortunately, we seem to have gotten away from the shared agreement that we need a functioning and effective government to solve our problems and questioning whether programs and policies offer equal benefits and opportunities to all people .  Instead we have ideological debates or we dismiss the importance of government all together in solving the real problems that we face .  Government overreach can be a problem, and there are times when we need more brakes than fuel, but we ought to agree that government provides an essential  structure for a functioning and modern society and the basis of our Constitution. We rely on it every day to support our schools, roads, police, infrastructure, health care and the security and safety of our communities.

I grew up in SWVA, still have an extended family there, return often, and communicate with them frequently. Many of them perceive that government is not working for them. What is worse: they see it working for others- for NOVA or for big business or corporations- but, not for them. They feel left behind and left out of the conversation. It is hard to argue that they are wrong in feeling that way.

In many rural parts of our state schools are closing or falling into disrepair as people move away from the area to find job opportunities; the opioid crisis is rampant and many areas lack infrastructure and adequate broadband service. Economies are struggling and wages are stagnant.  Rural hospitals are closing leaving people with few health care options and emergency services that require long distances to reach care- which can mean the difference between life and death in a trauma. A thriving national economy or stock market has not translated in the same way in rural areas as it has  in urban areas.  After the bottom of the economy dropped out in 2008, many other parts of Virginia saw recovery while rural communities continued to struggle.

Democrats should begin by doing everything we can to earn back trust in government.  We should recognize the anger and disappointment of those who feel left out of government and we should be angry right along with them. We must prove that we hear concerns, and that we will do everything we can to find real solutions to the issues that challenge every community.

Our approach to government should be like Teddy Roosevelt’s Square Deal; it should work for everyone, rich or poor, business or labor and urban or rural.  We should promote policies that do not favor unfairly any group or area. Let’s agree that we have big problems to solve- and we do. Then, let’s have the argument about what is the most effective and feasible way to solve those problems in a way that takes everyone into consideration.  Let’s not dismiss government as the problem. Instead, let’s understand that government can play a positive role in helping us “form a more perfect union” as long as we are all working together. After all, we are all hitched behind that same metaphorical train engine that my uncle talked about. We should work as partners and fight to make sure government works for every Virginian, no matter which part of the state you live in.  If our government does not work for everyone, then it doesn’t work for anyone.